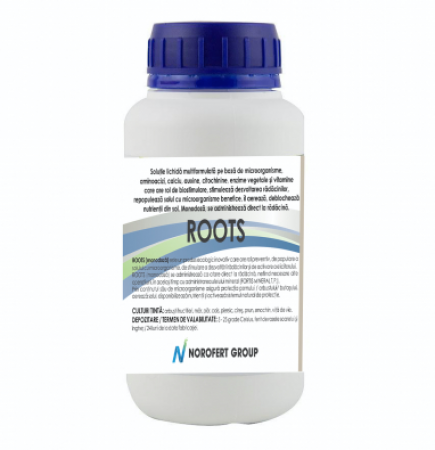 ROOTS is a product made in accordance with Regulation 834/2007.

ROOTS (monodose) is an innovative ecological product that has a preventive role, to populate the soil with microorganisms, to stimulate root development and to activate the helix.

ROOTS its administered as such directly to the root, no other operations are required, at the same time as the administration of mineral oil Fortis Mineral T.P.

Due to its microorganism content, it ensures the protection of the tree/shrub/cutting, aerates the soil, releases nutrients and activates the natural protection system.

The role of Trichoderma mushrooms

The role of Bacillus Subtilis

The role of Bacillus Amyloliquefaciens

The role of amino acids

The role of humic acids

The role of Ascophyllum nodosum

The role of Azospirillum lipoferum

The role of mycorrhizae

A mycorrhiza is a form of symbiosis between fungi and plants in which a fungus comes in contact with the fine root system of a plant. Due to their specific characteristics, mycorrhizae are traditionally divided into three different groups: ectomycorrhizae, endomycorrhizal and arbuscular mycorrhizae. Another classification distinguishes between five mycorrhizae, namely orthoid, ectopic, arbutoid, ericoid and arbuscular as two antagonistic forms.

The mycelium (all branched hyphae) forms a dense sheath around the young root tips, still without bark. As a reaction, the ends of the roots swell and no longer develop hairs. After the needles are missing, the mushroom hyphae take over. Thus, fungal hyphae grow in the root cortex but do not penetrate their cells, but form in the extracellular spaces a network that facilitates the exchange of nutrients between the fungus and the plant, the so-called “Hartig Network” (after the German forest botanist Robert Hartig, 1839-1901 ).

They reach very far into the soil matrix, ensuring good and extensive absorption of nutrients and water. In addition, mycorrhizae protect the roots of trees from infections by penetrating bacteria or other fungi.

ROOTS (single dose) is a dark brown liquid with a specific odor.