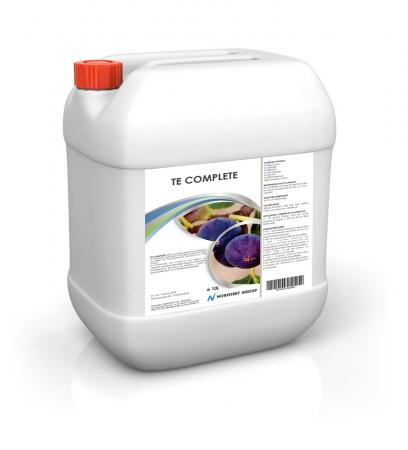 TE Complete is a product made in accordance with Regulation 834/2007.

TE Complete is a product recommended for use in organic farming and is formulated based on trace elements, amino acids and humic acids.

The role of amino acids

The role of humic acids

The role of Copper (Cu)

Deficiency leads to delayed flowering, few flowers that are difficult to open or not at all. Sterility of flowers, especially those at the top of the ear, inflorescence, shoots. Deformed flowers or inflorescences, delayed ripening of berries, or fruits formed.

The role of Iron (Fe)

Iron is especially important in the process of photosynthesis. Deficiency leads to yellowing of younger leaves, so they acquire a yellowish-green color, then the areas between the veins become lemon-yellow or white-yellow. Only the main nerves and less often the secondary ones remain green. They look withered. Sometimes the young leaves become completely whitish. Vine trees and stumps are poorly developed and weakened. Fruiting is very poor. The grapes are small with low sugar content.

The role of manganese (Mn)

Plays an important role in photosynthesis. It causes a better resistance of plants to frost, drought and a high content of soluble salts in the soil. It plays an important role in the flowering of plants. Deficiency. The symptoms appear in the form of internervurian chlorosis similar to those of Mg deficiency, with the difference that it manifests itself first on the young leaves, from the top, and on those that have recently reached maturity and extend to the base of the plant or shoots.

The role of Zinc (Zn)

Plays an important role in photosynthesis. Increases plant resistance to frost and drought. Deficiency can cause pollen sterility, poor, incomplete binding, and the formation of a small number of seeds or fruits, which are usually small.

TE Complete comes in a dark brown liquid with a specific odor.