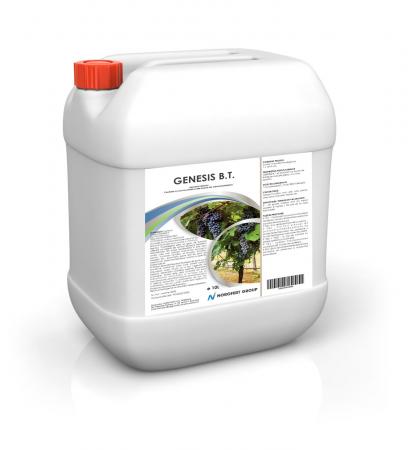 Genesis B.T. is a product made in accordance with Regulation 834/2007.

Genesis B.T. is an ecological insecticide formulated on the basis of live cultures of Bacillus Thuringiensis. A systemic insecticide that successfully fights caterpillars and other insects of the order Lepidoptera.

Bacillus Thuringiensis is a group of bacteria used as biological control agents against pests of the class Lepidoptera and is one of the most used ecological insecticides for the control of caterpillars, larvae, butterflies, wasps, etc. (fights over 400 types of Lepidoptera insects), with very high specificity.

During sporulation, Bacillus Thuringiensis produces a crystalline protein that is lethal to targeted pests. After being ingested by the insect, the dissolution of the crystal allows the release of the protoxin. The toxin is then activated by the juice of the insect’s intestines and begins to decompose, killing the insect. It is recommended to be applied preventively during periods of risk. It also has a healing role if applied at the beginning of the pest attack.

Bacillus Thuringiensis does not harm the bees.

Genesis B.T. comes in a yellowish liquid with a specific odor.