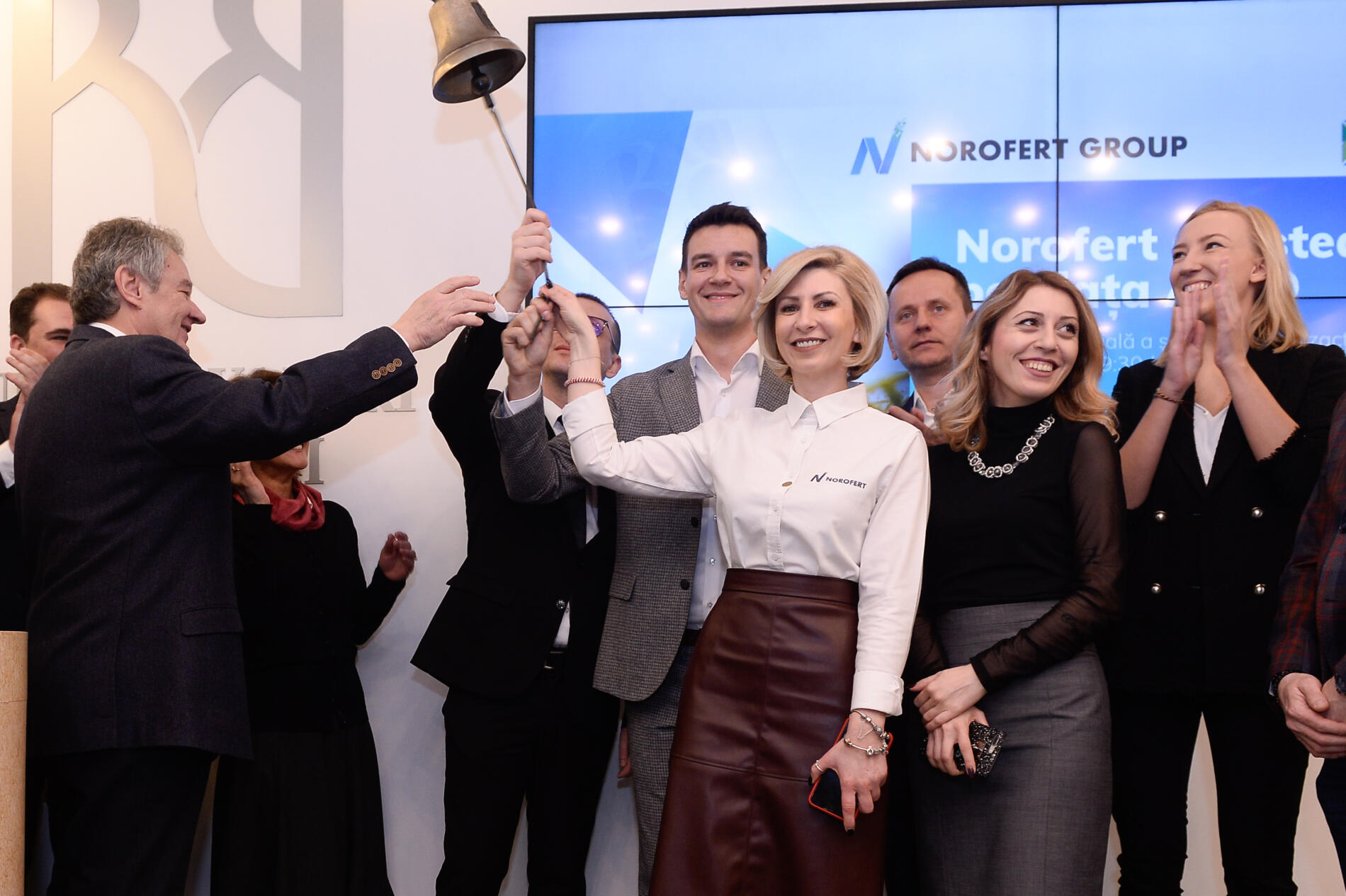 Bucharest, 3 March 2020 – Shares of Norofert SA, the leading Romanian producer of organic fertilizers, began trading on the AeRO market of the Bucharest Stock Exchange on March 3rd, 2020 after the company has officially opened the trading session at the BVB Headquarters. The shares of Norofert are tradable under the NRF symbol.

Norofert, a company established in 2000 by Florin Popescu and since 2015 run by Vlad Popescu, has remained throughout the years a family business and today is one of the most important producers of organic agricultural inputs in Romania. On July 18th, 2019, Norofert has carried out a private placement for its shares during which the company attracted 7,25 million lei from 71 capital markets investors. The offer closed within 8 hours of launching, thus becoming the fastest private offer to take place on the Bucharest Stock Exchange in recent history. The investors have subscribed to a number of 712,500 newly issued shares, which had a nominal value of 0.4 lei per share and an issue premium of 9.6 lei per share. The market capitalization at the time of private placement was over 20 million lei.

“We are excited to formally begin the journey of Norofert on the Bucharest Stock Exchange, by listing NRF shares on the AeRO market. The impact that the capital raised through private placement is unprecedented and it has helped us grow our business significantly as well as start our foreign expansion. We thank all the shareholders who have supported us in making this first step in capital markets and we look forward to growing together as we continue to use capital markets financing to develop the business of Norofert”  said Vlad Popescu, CEO and President of the Board at Norofert Group.

The capital raised during Norofert’s private placement has been directed into the launch and promotion of Karisma line, an extension of the team with 28 new employees as well as equipping and kickstarting the operations in the new factory in Filipestii de Padure. Following the investments, the production capacity at the factory has increased ten-fold as well as the company has grown its product portfolio from 24 to over 60 products, grouped into three main lines – Norofert Organics for large-scale organic farming, Karisma for large-scale conventional farming and Norofert Fito, a hobby gardening and small farmers line. In the period following the private placement, the company has managed to increase its client base from 39 customers (as of July 1st, 2019) to 402 clients as of December 31st, 2019.

Following the private placement, Popescu family represented by Vlad Popescu, CEO and President of the Board as well as Ileana Popescu, holds a stake of approximately 60% while the free float is 40%. The Authorized Advisor that assisted Norofert in carrying out the private placement in July 2019 as well as who ensured the admission to trading was SSIF Goldring while Cornerstone Communications managed the company’s investor relations and law firm NNDKP was responsible for preparing the corporate structure for listing as well as carried out the legal audit.

“Launching Norofert on BSE is, to Goldring, another accomplishment of our assumed mission, that is to encourage Romanian entrepreneurial initiatives which are not only bold but visionary and innovative. I believe that investing in technology and innovation in the agri-sector – and mostly ecologic agriculture – is, and will indefinitely be, a unique opportunity, because it approaches an essential critical need of the human society which, challenged with increasingly more restraints and obstructions, is searching for answers and solutions. Norofert has successfully undertaken such a mission itself and undertakes to keep up the innovation pace” said Virgil Zahan, CEO at Goldring.

“We are proud to have been alongside Norofert from the moment they decided to raise capital through the local capital market, up until today when the NRF shares finally begin trading on the AeRO market. The unparalleled interest that the investors have given to Norofert is a clear sign that BVB is the right place for innovative businesses to raise capital for their development and we look forward to continuing our mission by assisting more Romanian SMEs in listing on the local exchange” said Zuzanna Kurek, Partner at Cornerstone Communications and Member of the Board of Directors of Norofert.

On March 2nd, 2020 Norofert has published in preliminary financial results for the full year 2019. The Group has ended 2019 with a consolidated turnover of 14.8 million lei, an increase of 59% compared to the 2018 result. The increase in the revenues has been a result primarily of the efforts of the sales team that has joined the company in August 2019 as well as the enlarged range of products – both of these developments being possible because of the capital raised during private placement. With all the heavy investments carried out in 2019, Norofert ended the year with an increase of 12% in gross profit, reaching 5,17 million lei, and a net profit of 4,5 million lei.

Considering the valuation of the company at the time of private placement, Norofert shares have a price to earnings ratio of approximately 4.5, which is one of the lowest currently recorded amongst the companies listed on the Bucharest Stock Exchange.

Norofert Group (BVB: NRF) is a leading Romanian producer of organic agricultural products and an experienced player on the Romanian farming market. Established in 2000 as a family business, the company was initially the importer of high-quality fertilizers from Western markets to Romania. In 2015, with Vlad Popescu taking up the reins, the company has begun producing bio-fertilizers, organic phytosanitary products such as insecticides and fungicides as well as seed and foliar treatments using its original recipes. Between 2017 and 2019, the company has undergone rapid growth after developing a proprietary technology Bio Chain and launching a premiere in the agricultural sector, an effervescent tablet. Today, Norofert is a group of companies that include a line for organic farming (Norofert Organic), a line for conventional farming (Karisma) and a hobby gardening and small organic farmers line (Norofert Fito).