Norofert reports a turnover of 29.9 million lei and a net profit of 5.6 million lei, in the first semester of 2022 - Norofert Group

Norofert reports a turnover of 29.9 million lei and a net profit of 5.6 million lei, in the first semester of 2022 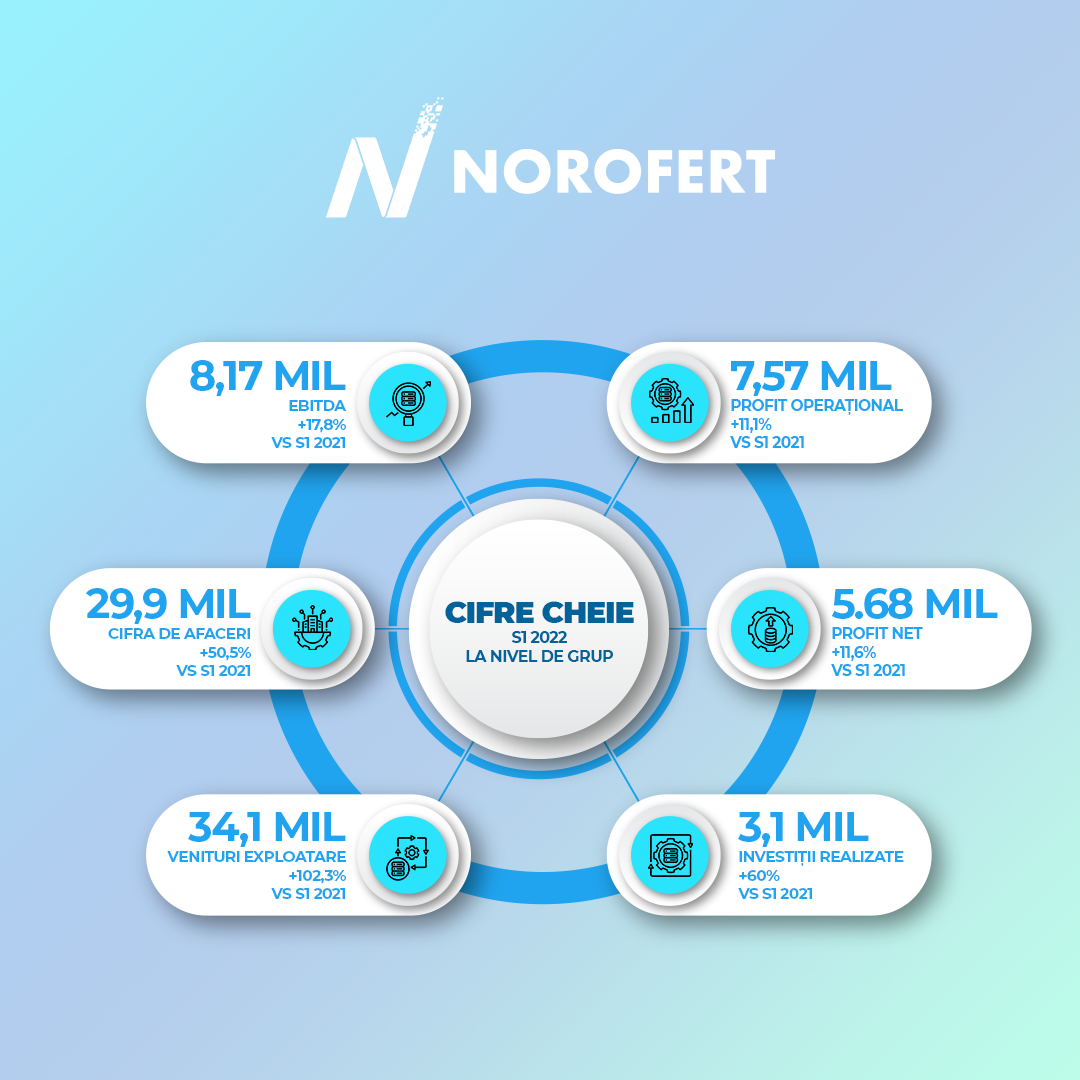 Norofert reports a turnover of 29.9 million lei and a net profit of 5.6 million lei, in the first semester of 2022

Bucharest, September 7, 2022 – Norofert SA (BVB Symbol: NRF), the main producer of organic inputs in Romania and an experienced player in the agricultural market, reports a consolidated turnover of 29.9 million lei in the first half of 2022, with an increase of 50.5% compared to the same period last year and a net profit of 5.68 million lei, an increase of 11% compared to the first semester of 2021. Despite the fact that the group made in S1 2022 the greater investment in the plant, including in the solid fertilizer line and in the farm to date, the company has marked a net profit for the first six months 10% higher than the same period of the previous year.

“At Norofert, in the first semester of 2022, the activity experienced a significant increase both in terms of the number of new farmers brought into the ecological system, and in terms of the volumes that the team sold in the market. As every year, the product range confirmed farmers’ expectations, even in the difficult conditions that S1 2022 presented. The research and development partnership that we have started with the Faculty of Biotechnology at USAMV acts as a catalyst for the innovation projects that we have started and that we intend to develop more and more, including in the laboratory which we will install at the production facility in Filipeștii de Pădure. Last but not least, we are very proud of the commissioning of the soil fertilizer production line and we already see the signs of a business line that will take Norofert far in the coming years, thanks to the comparative advantage offered by this investment. The effort and investments for putting the line into operation were very high and the fact that trucks with granulated fertilizers produced by us leave Filipeștii de Pădure is a source of pride for the entire company”, said Vlad Popescu, Chairman of the Board of Directors, Norofert Group .

The company recorded in the first half of 2022 the largest quantities sold of fertilizers and bioprotection in the history of Norofert. This growth is based on the conversion to organic farming of an increasing number of farmers. Norofert estimates that the trend for the second half of the current year remains on an upward trend. Despite the adversities and very low market expectations, the total quantities harvested in Romania were at a level only slightly lower than last year, in a market with grain prices well above the 2021 level.

In order to face the challenges in the current context, where raw materials are difficult to transport and often the waiting times are very long, Norofert procured raw materials in larger quantities and decided to produce finished goods in larger quantities, in order to avoid possible blockages that may occur until the end of this year. In addition, material expenses increased by 251%, as demand for Norofert products increased rapidly in the first six months of 2022. There was also an increase of between 5% and 10% in the prices of all raw materials. The company aims to reduce operating costs by streamlining agricultural work, using scanning technology and machinery surveillance at its own 1,000 ha farm in Zimnicea, Teleorman county.

For the second half of 2022, Norofert aims to have at least as optimistic results and believes that the commissioning of the soil fertilizer production line at the Filipeștii de Pădure plant in July will lead to an increase in granulated fertilizer sales . In addition, Norofert intends to continue the investments at the factory in Filipeștii de Pădure, by installing a microorganism multiplication laboratory, increasing the production capacity and liquid bottling, following in the future the construction of a new hall for the storage of fertilizers.

At the same time, in Q3 and Q4, Norofert plans to finalize the technical project and choose the financing method for the first 200 ha of the irrigation system planned at the farm in Zimnicea. The actual works are expected to start in the first part of 2023. The Norofert management maintains its budget forecasts for 2022, considering the evolution of the Romanian agricultural sector to date.

Norofert Group shares are listed on the AeRO market of the Bucharest Stock Exchange starting on March 3, 2020 and are traded under the symbol NRF. The company has a market capitalization of more than 140 million lei, value more than 6 times higher since the listing and a shareholder base of more than 3,000 investors. As of October 11, 2021, NRF shares are included in the BET-AeRO index developed by BVB for this market.

Norofert SA is the main producer of organic inputs and an experienced player on the agricultural market in Romania. Norofert operates on three main lines of business: production of inputs for organic agriculture, organic farming and grain trading. Norofert’s philosophy is to be with the partner farmers throughout the plant cycle, from the provision of ecological inputs, to the monitoring of the crops and to the taking over of the grain at harvest from the farmer to be exported to the final processors, with whom contracts are concluded preset trading. On March 3, 2020, the company’s shares entered trading on the Bucharest Stock Exchange under the symbol “NRF”, and on June 5, 2020, Norofert bonds debuted under the symbol “NRF25” on the SMT-Bonds market of BVB. www.norofert.ro .