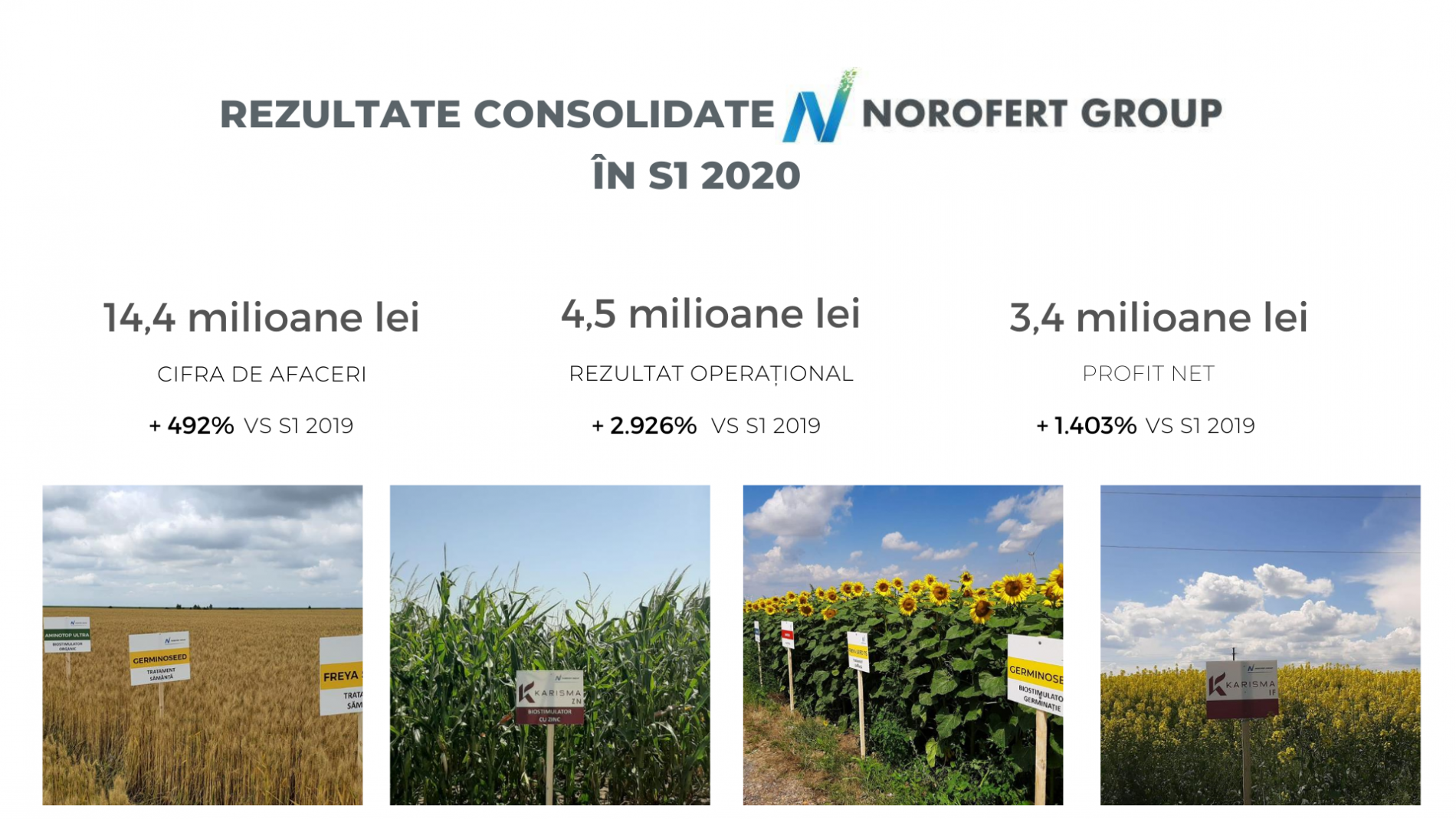 Bucharest, 2 September 2020 – Norofert Group, the leading Romanian producer of organic fertilizers, reports 14.4 million lei in consolidated turnover in the first half of 2020, an increase of 492% compared to the same period of last year. Despite difficult circumstances, the Group has managed to close the period with a net profit of 3.4 million lei, an increase of 1,403% compared to last year.

The first half of 2020 was a volatile period for the Romanian agriculture sector, marked with two major events – the outbreak of the COVID-19 pandemic and severe drought. The effect of COVID-19 on Norofert has been minimal as the pandemic did not impact the operational or sales activity of the Group in Romania. The severe drought, however, had a direct negative impact on lowering the profit margin of the Group. Nonetheless, despite a volatile and challenging first six months, the Group has managed to reach already the turnover target it has set for the full year 2020.

“We are proud to present today the interim financial results for the first half of this year. When comparing to the same period of last year, despite demanding economic and meteorological conditions, notable increases were recorded by Norofert in the first six months of 2020. Nonetheless, we remain focused on the ongoing autumn campaign; even though we managed to reach the revenue target for this year, we will still increase it further in order to meet the profit targets we have planned for this year. However, as always for our sector of activity, our full-year result will heavily depend on circumstances not dependent on us – the weather” said Vlad Popescu, CEO and President of the Board of Norofert.

At the Group level, Norofert closed H1 2020 with a 596% increase in the operating revenue, as the turnover grew by 492% from 2.4 in H1 2019 to 14.4 million lei in H1 2020. The larger production facility, increased sales capacity and bigger recognition in the market have contributed to the significant increase in sales compared to the same period of last year. The controlled increase in expenses, as well as larger scale, helped Norofert end the period with an operating result of 4.5 million lei, 2,926% higher than the result from the same period of last year. The management attributes the significant improvement in performance to the capital accessed by the Group on the Bucharest Stock Exchange.

Since March 3rd, 2020 Norofert Group is listed on the AeRO market of the Bucharest Stock Exchange. In 6 months since the debut, NRF shares were amongst the most traded local stocks. Between March 3rd and September 1st, trades with 1,827,139 NRF shares in the total amount of 23,981,494 lei were executed.

For the second half of the year, Norofert expects an increase in sales during the autumn campaign compared to the last year’s performance. The Group also targets further investments in the process of expanding and improving production capacity with the construction of a new, high-capacity soil fertilizer line. The investment is expected to boost Norofert’s current granule and pellets production capacity to 4 trucks per day and will allow creating new products that exceed current market standards.

The Group continues its process of expansion to the United States of America. In April 2020, Norofert established Norofert USA, LLC, an Ohio-based subsidiary. In July 2020, the Group received approval for distribution and marketing of first 4 of our products that were developed for the US market. In August, the Group has rented a storage space in Cleveland, Ohio where it has sent the first container with Norofert products. The Group expects that the first batch of Norofert products will reach Ohio farmers in the second part of the year, during the autumn campaign.

Norofert Group (BVB: NRF) is a leading Romanian producer of organic agricultural products and an experienced player on the Romanian farming market. Established in 2000 as a family business, the company was initially the importer of high-quality fertilizers from Western markets to Romania. In 2015, with Vlad Popescu taking up the reins, Norofert started producing bio-fertilizers, organic phytosanitary products such as insecticides and fungicides as well as seed and foliar treatments using its original recipes. Between 2017 and 2019, the company has undergone rapid growth after developing a proprietary technology Bio Chain and launching a premiere in the agricultural sector, an effervescent tablet. Today, Norofert is a group of companies that include a line for organic farming (Norofert Organic), a line for conventional agriculture (Karisma) and a hobby gardening and small organic farmers line (Norofert Fito). On March 3rd, 2020 the company has floated on the Bucharest Stock Exchange and has been since then traded on the AeRO market under “NRF” symbol.