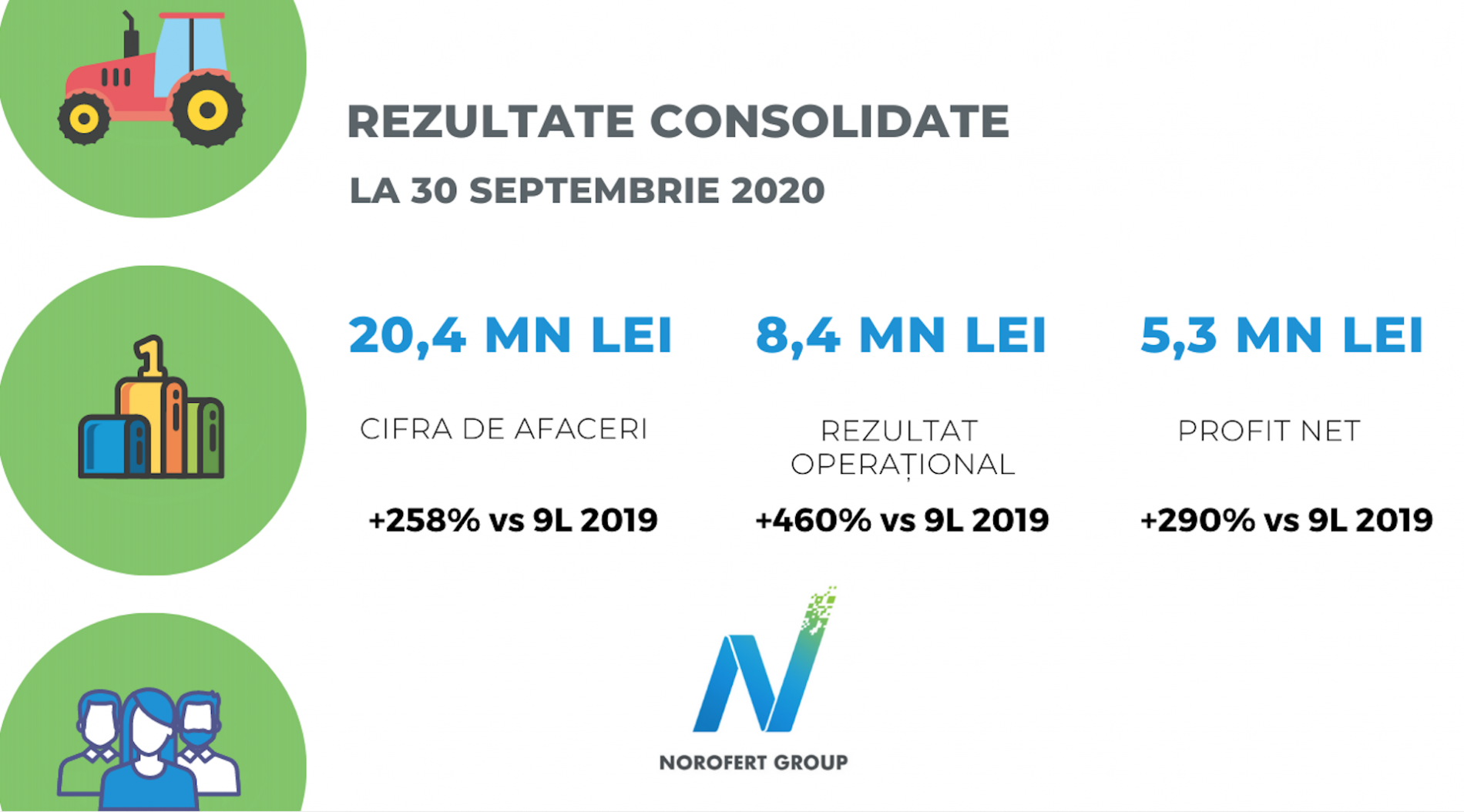 Bucharest, 20 November 2020 – Norofert Group, the leading Romanian producer of organic fertilizers, reports consolidated sales of 20.4 million lei in the first nine months of 2020, an increase of 258% compared to the same period of last year and the net profit of 5.3 million lei, a year-on-year increase of 290%.

“Third quarter is the most challenging period of the year for us as well as for any agribusiness as it is a quarter in which a harvest season for wheat and rapeseed overlaps with a sales season for the fall campaign. It is, from the point of view of production, logistics and finance, a very demanding quarter for the entire company. This year, on top of the usual challenges, we also had to deal with limitations resulting from a global pandemic as well as severe drought recorded throughout Europe. Despite this difficult context, thanks to our solid business model, already as of September 30th, we have managed to meet both the revenue as well as the profit target set for the full year 2020”, said Vlad Popescu, CEO of Norofert SA.

At the Group level, Norofert closed the nine-month period with a 318% increase in the operating revenue, as the sales grew by 258% from 5.7 million lei as of September 30th, 2019 to 20.4 million lei as of September 30th, 2020. The significant increase in turnover was the result of continued efforts of the sales team as well as the growing position of Norofert Group on the market for both organic and conventional inputs.

In 2020, the Group saw the benefits of the demonstration lots established during the fall 2019 campaign for wheat and rapeseed farmers as well as sunflower, corn, and soybean farmers during the 2020 spring campaign. The Group has a client conversion rate of approximately 85% for farmers who have hosted Norofert demonstration plots. At the level of all the clients, so far in 2020, the Group saw a customer return rate of 95% for both organic and conventional farming inputs.

As a result of a significantly larger scale of the business, the Group closed nine months of 2020 with operating result of 8.4 million lei, an increase of 460% compared to the same period of last year, and a gross result of 6.5 million lei (+348%). Consequently, the Group ended the period with 5.3 million lei in consolidated net profit, a 290% increase compared to the first months of 2019. The management attributes the significant improvement in performance to the capital accessed by the Group on the Bucharest Stock Exchange.

In the course of the third quarter, the Group continued the process of expansion to the United States of America. In July 2020, the Group received approval for distribution and marketing of the first four products that were developed for the US market. Since then, Norofert has established several demonstration lots in Ohio that serve as a spearhead for promotion of its products in Ohio and neighboring states. Additionally, since September, the Group is negotiating with several retailers interested in marketing Norofert’s ready-made products online and in brick-and-mortar stores. The management expects the first sales on the US market will be made before the year-end, with the activity picking up in 2021.

On November 20th, before announcing the Q3 2020 results, Norofert’s shares traded at 11.9 lei per share. Consequently, the market capitalization of Norofert reached 95.5 million lei, an increase of 287% since the listing of the company on the AeRO market on March 3rd, 2020.

Norofert Group (BVB: NRF) is a leading Romanian producer of organic agricultural products and an experienced player on the Romanian farming market. Established in 2000 as a family business, the company was initially the importer of high-quality fertilizers from Western markets to Romania. In 2015, with Vlad Popescu taking up the reins, Norofert started producing bio-fertilizers, organic phytosanitary products such as insecticides and fungicides as well as seed and foliar treatments using its original recipes. Between 2017 and 2019, the company has undergone rapid growth after developing a proprietary technology Bio Chain and launching a premiere in the agricultural sector, an effervescent tablet. Today, Norofert is a group of companies that include a line for organic farming (Norofert Organic), a line for conventional agriculture (Karisma) and a hobby gardening and small organic farmers line (Norofert Fito). On March 3rd, 2020 the company has floated on the Bucharest Stock Exchange and has been since then traded on the AeRO market under “NRF” symbol.